The best part for me of this last weekend’s gringo food tent at the Jora celebrations was seeing so many indigenous and mestizo locals communicate with us in their best English and express their support and friendship.

Linda Arney of the Intercultural Food Committee writes, “For those of us who were fortunate enough to work at the weekend gringo food tent, we felt the experience exceeded everyone’s expectations of cultural exchange.

Both Ecuadorean and gringo alike practiced English and Spanish respectively; one elderly gentleman even corrected a food sign.

The people were as curious about us as we were about them. Support for the culinary treats was largely from the Ecuadoreans who were willing to sample the various different foods available, even returned for seconds, all the while exclaiming “muy bien.” They even ate the vegetable salads! The workers and committee members are looking forward to next year if gringos are invited to participate.”

“FYI – The Saturday/Sunday food sales generated a total of $197,” Linda continues, “which includes $1.66 in additional paper products and $12 tent rental plus other tent rental donations. All proceeds have been given to Micky for distribution to Ecuador Project Hope.”

We’re very thankful for all the support also extended by Joanne and Ed Rogers and Cecilia Dvorchak (and other Food Committee members above), when we had last-minute unexpected costs and logistical issues related to the setup and breakdown of the food tent.

We participated in the weekend display of Cotacachi’s “Comidas Tipicas,” but the “tipica” food at the tent where Linda Arney and Norma Williams of the Food Committee, and Micky Enright and several other expats met and collaborated on our potluck fundraiser was, as one indigenous man described, “comidas tradicionales de mas alla,” (traditional foods of farther away).

I did eat an interesting bug at one food tent, a local insect called a Katsu. It didn’t taste great, but other than that dish, we’ve seen almost all the local “gastronomia.” Our table drew the biggest crowds of people lined up to try dishes they may have only heard of before, and Micky Enright pointed out, “Ecuadoreans really enjoyed the food.

I went to the copy shop across the street and the owner and worker were eating the food. Bueno—-  he came back for another plate. Amazing more Ecuadoreans than expats were in the food line.”

“Wasn’t it just the best weekend?”, Norma wrote me and went on to recount how the “New Residents” food table for the Fiestas de la Jora was visited by Juana Morales, the head of the (45 native communities) women’s group that has always brought foods to sell at this planting time celebration. “She was elegant, and gracious, and her visit was really appreciated,” adds Norma, “It made us feel involved and welcome.”

With the blessing of the women’s group, we hope to be better able to coordinate for future intercultural activities. (I think they were joking that I have to wear a skirt.)

We estimate that more than a couple of hundred plates and servings were sold each of the two days and even though, yes, a lot of people came back to buy second and third helpings, that still adds up to a lot of interest and support from local indigenous and mestizo residents for their new neighbors and ultimately for the Project Hope Foundation.

The parade on Friday was another opportunity for us to show up as part of the Cotacachi community; not turistas or just extranjeros, strangers, foreigners, ex-patriots and gringos. We are residents.

“It was a real surprise (a pleasant one) to see the parade viewers break out in applause for our group,” says June, “This happened at a few different places on the route. Then when we arrived at the end, at the mayor’s viewing platform, all of the mayor’s group gave us a warm welcome (translated into English, too). We tipped our (Panama) hats to them, also.”

We were given the hats during the parade by Jorge Pazmiño, Head of Tourism Management and Development for Cotacachi. This all encouraged us to consider learning a dance step for our group next time. If anyone can teach a two-step (Texan or otherwise), let’s talk.

I will translate and send out the official press releases as they come, but here are some pictures we found in the El Norte newspaper about the Parade of Joy. You might recognize some of our group in one of the photos. 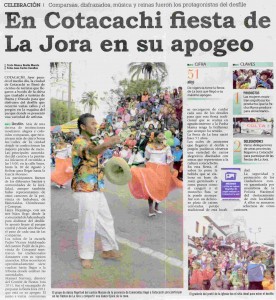 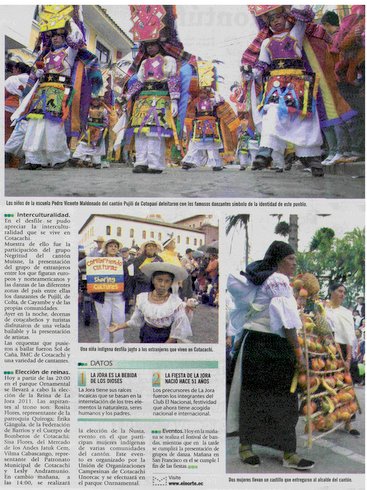 Care to Make a Contribution?

One person can make a difference. Your small donation today makes a huge difference! 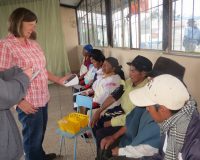 Christmas, Blessings and News for 2019 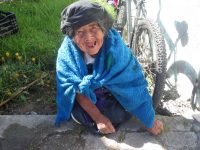 Easter Festivities at Place of Hope – 2019